Are you looking for the inexpensive and comfortable apartments in the downtown of Riga?

“Ganibu loft” is the 5-storey residential housing complex and it is right choice for you. The complex is located outskirts of the downtown “Ganibu dambis”, a few minutes from Riga’s center. The housing complex includes apartment studios which designs are based on the Micro Loft style. The modern, functional and very convenient apartments are specifically and perfectly designed for comfortable life of young professionals, office workers and young married couples without children.

The residential housing complex “Ganibu loft” is situated at Ganibu Dambis 31b, at the territory of the former factory administrative facility. The renovation had been made by the company LLC “NG Grupa”. As a result of renovation the former warehouses and manufacturing facilities have been transformed into contemporary and functional residential premises. Currently it is not easy to find so high quality and reasonably priced apartments for rent at the downtown of the capital as you can find at the complex “Ganibu loft”.

Why rent of loft apartments in Riga is so advantageous and beneficial?

Currently, the single room studios are offering for rents. The sizes of studio are 29 and 33 square meters.

Information about the apartments

The loft – is the architectural style of the apartments. It is actually a conversion and transformation of the industrial facilities and factories into residential apartments. The loft as the interior style was firstly emerged in the middle of XX century in the urbanized United States. As the land price in the city had been dramatically grown, the owners of the production spaces had been forced to move production into suburbs and empty industrial facilities have been transformed into housing premises. Going through difficult way from workshop or working room to comfortable dwelling, the loft became popular all over the world. Today the loft is preferred by people who value usable, creative and minimal interior.

Features of the style

As a rule, the loft style is for designing of studios where furniture and finishing are used for dividing the functional areas. It may seem that such a living space is an economical one. But in reality, the loft style is one of the most expensive and elite styles.

Usually, the loft style uses softened color, calm, and cold – grey, blue and metallic. The finishing works are specific – one of the walls and part of the floor and ceiling near of the walls are decorated by the panels or tiles stylized under brisk or wood. Such a finishing technique is used to specifically designate and mark a functional area.

The furniture under the loft style is simple and functional. The furniture is also served as a partition and divided space into sectors.

Micro loft in interior of studios in Riga

Loft apartments “Ganibu Loft” are located in the former factory administrative and office facility in Riga. The sizes of studios are varied from 29 to 33 square meters. In 2015 the company LLC “NG Grupa” had fully renovated the factory facility and transformed them into modern and comfortable housing complex. Today all these inexpensive studios are for rent, and the terms of lease are starting from one month. The apartments are small studios which are designed in the neo-loft style. The team of young creative architects and designers were capable within a limited space to create a comfortable and modern apartment that includes bathroom with toilet, sleeping space, living area, kitchen and working space.

Multi-functional micro-loft apartments for young couples or young professionals. Pay attention to "Ganibu Loft" if you want to find inexpensive and comfortable accommodation.

Close to the apartments there is a large shopping center "Sky & More", several business centers and hotels where are located popular restaurants and cafes in Riga:

Within walking distance, there are:

The two-storey shopping center "Sky & amp; More", located 4 minutes' drive away, with shops of the best brands in all categories: 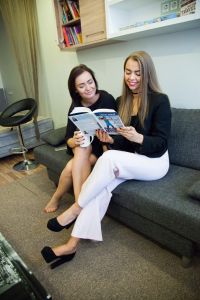 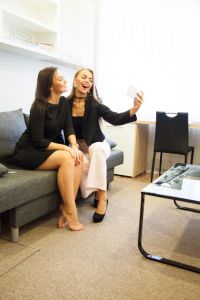 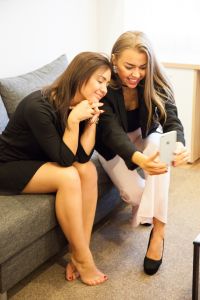 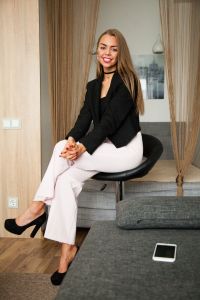 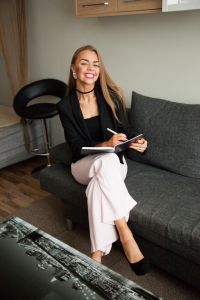 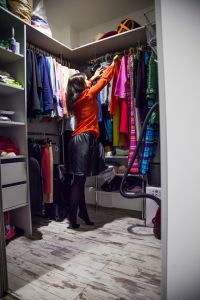 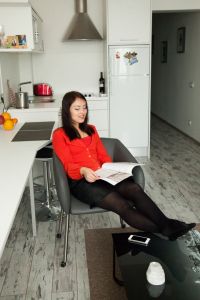 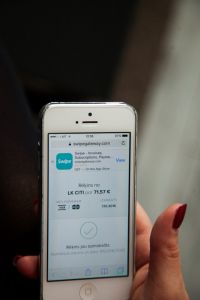 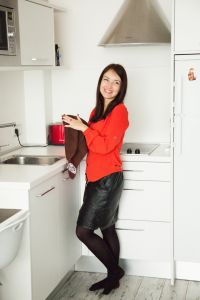 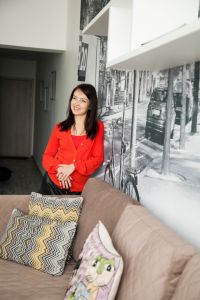 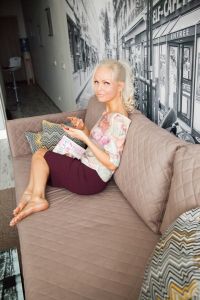 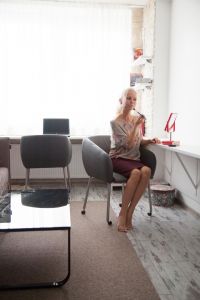 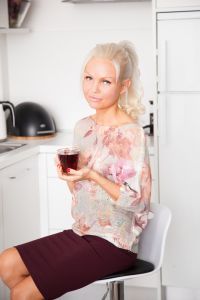 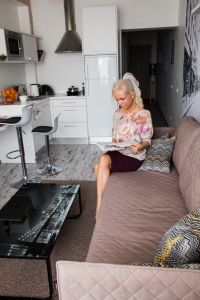 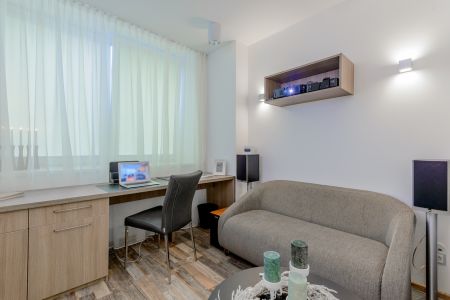 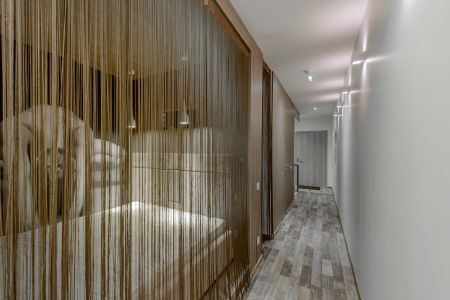 Do I need to pay security deposit?

If the apartment is damaged by any casualty resulting from any actions of residents, their family, guests and visitors we are expecting that they will notify the management on these events and be liable for the cost of any such damage.

Subject to the specific arrangements with the management, the security deposit may be divided into two-three parts and be paid within one-three months.

How and when shall I pay my rent?

You will find the date of rent payment in the bill. Rent must be paid in full before that date. The rent payment is effected in euro and can be made via bank transfer within two-three days after resident moves into the apartment.

Does the rent include all local taxes, charges and fees?

The bill includes rent with all local taxes, charges and fees. If the legal entity rents the apartment, the rent will additionally include 21% of the value-added tax.

How can I complete the paperwork for booking of an apartment?

The booking of apartment will be secured upon you make a pre-payment in the amount indicated in the bill.

The rent payment can be made via bank transfer, or with the use of the PayPal payment system or with the credit card through the online application Swipe.

Is it possible to check availability for vacated apartments and rent them?

Sure. If you have any questions on vacated apartments or lease terms, feel free to call us by (+371) 29541486 or you can send us your question by e-mail: This email address is being protected from spambots. You need JavaScript enabled to view it. or you can use a contact form in our site.

What are the working hours of the management? What is the earliest time when I can move into the apartment and what is the latest time to move out of the apartment?

For convenience of our clients, the management of our office is available during office hours to assist you in moving in and in moving out of the apartment. The standard office hours are from eight mornings to midnight.

We will arrive early morning. Can I order transfer from airport to apartment? How much it will be cost?

The management will not provide transfer service.

For permanent residents and subject to a specific agreement, we can arrange transfer free of charge. Our manager will meet you at Riga airport and will escort you to the apartment.

The management can help you to order an inexpensive taxi cabs. To find out prices on taxi services in Riga or place order for transfer from airport, you can call by (+371) 29541486 or send us a request by our e-mail: This email address is being protected from spambots. You need JavaScript enabled to view it.

Can guests visit the leased apartment?

As all our apartments are for a long lease, there are no issues with the guests and you decide yourself who will visit you and who won’t.

Is the rent of the apartment calculated per person or per month, as indicated in your site?

The rent of all apartments is calculated per month. The minimal lease term is one month.

For convenience purpose you may find a rent payment calculator in special category “Rent” at the full description of the apartments in our site. You may calculate the lease payment depending on the selected apartment and terms of lease.

Are your apartments furnished?

Upon clients’ preferences we offer three packages of furnishings:

Also, for small amount of money your apartment will be cleaned more frequently than usually.

Is there fully equipped kitchen in the apartment?

All apartments have a fully equipped kitchen. If you place an order for a package of STANDARD@CLEANING or LUX@CLEANING, all kitchen will have a set of new dishware for cooking and eating.

Is smoking permissible in the apartments?

By Latvian legislation smoking in all residential apartments is strictly forbidden. There is a special smoking area outside of the apartment.

The management requests you to obey the smoking rules as such obedience is the sign of respect to the quests that will live in the apartment after you leave it.

Is the apartment cleaned and bed lines changed?

We provide mandatory regular free of charge monthly cleaning service for all our apartments.

The bed lines are not changed as all apartments are equipped with the washing machines.

How can I pay for the additional services?

If you decide to order additional services, you may pay via bank transfer or PayPal payment system or by credit card via online application Swipe*

*If payment is effected via PayPal or credit card, the extra online fee may be charged.

Are there any convenience stores or farm markets near the apartments?

Yes, there is hypermarket Sky near the apartment, just in few steps, roughly nine minutes of walk. Small farm market is located not far from the trade center Sky&More.

Are there mini safe-deposit boxes in the apartments?

No, there are no mini safe-deposit boxes in the apartments.

Mini safe-deposit boxes can be available under specific request and for buyers of extra package.

Is it permissible to live in the apartments with pets?

Pets and birds are not allowed in the apartment. By this ban we guarantee to all our guests the absence of allergy.

However, for our permanent residents and with our prior consent we can allow small pets (weight is up to 10 kg) to stay in the apartment. It will cost roughly 10 euro per month.